A Time to Reflect…

Two fox squirrels chattered. Sandhill cranes chortled near the Riviere aux Raisins. A crimson cardinal twittered about as if deciding whether to stay or move on. A solitary Canada goose uttered intermittent “ke-honks” on its way to the river. Orange painted the southern horizon. Patches of gray ice hinted at the tiny creek’s course, hidden in the sedge grass.

A young doe plodded through a tight-packed clump of red cedar trees that grew at the edge of the big swamp. Her damn followed. The creamy-tined spike measured the pair’s progress from a stand of poplar trees that grew on the west side of the wide fen. A sharpened lead, secured in a brass holder, scribbled the scene on folded paper.

Anxious legs tore tangled sedge grass as the spike made his way to the east bank. The doe and her summer fawn walked the earthen trail north, then east. The little buck pursued. The three passed. A fox squirrel barked. A Sandhill crane chortled. The pencil ceased writing. Mi-ki-naak paused, then reflected…

A Time for Fond Memories

Michigan’s muzzleloading deer season falls during Advent, a time of preparation and great anticipation for the celebration of the birth of Christ. On that evening, I stepped over time’s threshold and found myself thinking back to a hunting camp sequestered in the pines and hardwoods of Swamp Hollow.

Mi-ki-naak did not attend that simple pursuit, the post hunter did. That early October evening was mild and pleasant. A full moon rose above the tree line. A central campfire blazed away, and a handful of hearty 18th-century woodsmen gathered to share the harrowing tales of another day in the forest. A peaceful tranquility fell upon the lodges in that tiny hollow.

The post hunter slept on two blankets beside the crackling fire. The majesty of the universe shone down through the pine boughs. For me, that night is an enduring pristine memory. And as so often happens, I reflected on the shepherds and Luke’s telling of the Christmas story… 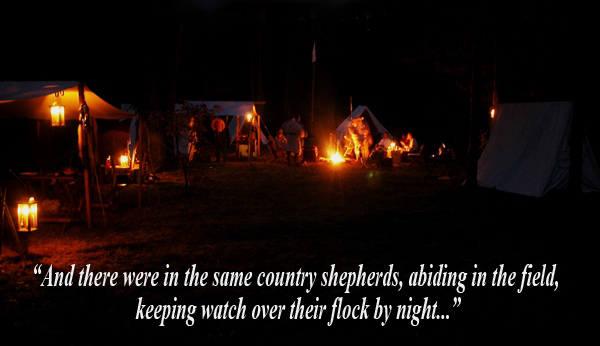 “…And, lo, the angel of the Lord came upon them, and the glory of the Lord shone round about them; and they were sore afraid. And the angel said unto them, Fear not: for, behold, I bring you good tidings of great joy, which shall be to all people. For unto you is born this day in the city of David a Savior, which is Christ the Lord…” (New Testament, Luke 2: 8 – 11)

3 Responses to A Time to Reflect…