So Many Times Before…

Decades before, God’s whimsy pushed the tree hard, leaving its westerly roots exposed. The three largest looked like gaunt fingers grasping and clawing at the earth in great desperation. The returned white captive knew this lair well. He pulled the trade blanket, the one that was once white but now dyed a forest brown, about his body, skootched back between two of the fingers and sat upon the raised seat formed by smaller, tangled roots. The evening sun was a finger above the far tree line.

After looking about, the woodsman checked the French fusil’s prime. As was his habit, he attempted to place the smoothbore across his wool-covered legs with the lock tucked under the blanket fold that passed beneath his right shoulder. The forestock bumped the root to his left, skewing the barrel skyward at an awkward and unacceptable angle. He huffed, a bit upset with himself for not recalling this problem. His hips moved to the right a bit. The long fusil’s barrel found its way to a somewhat bare spot on the root, a place where he had pulled off moss the fall before.

The bottoms remained quiet, almost too quiet. A red squirrel twittered, spiraled around a powder-keg-sized yellow birch, then glared at the interloper. The chatter turned confrontational, leaving little doubt this forest tenant intended to spend the night in the leaning maple tree’s upper reaches. Fur and fluff bounded from yellow birch to a dead ash to another yellow birch. From safe perch to safe perch, the red squirrel circled Mi-ki-naak. In time the woodsman heard tiny claws scratching bark on the maple at his back. 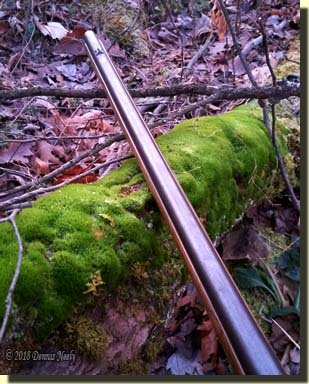 Throughout this woodland comedy, a lone goose ke-honked from the sand flats at the river’s bend. For whatever reason, the seasoned hunter glanced down. The fusil’s barrel and forestock stood out in stark contrast to the bright green moss that covered the exposed root. And yet, this implement of death appeared as just another harmless branch scattered about the tangle of tipped trees and fallen hulks.

Above the tree tops, far out over the river proper, two geese winged hard. The sky was a dark grayish-blue, the geese mere black silhouettes. Three times they circled, each time descending more, silent, beautiful, expected. One of the birds above uttered a single “ke-honk;” one of the birds below answered, “honk.” Cupped wings floated against an orange backdrop.

Near dark the owl hooted and a hen mallard began quacking. Seven more geese flew south, following the Riviere aux Raisins’ murky-brown waters. With little pretense, these birds dropped straight down, disappearing in the charcoal-colored abyss of the hardwoods on the far bank. At dark, nine Canada geese arrived, ke-honking all the way in.

Nary a deer ventured out of the bottoms that night. Dried jerk would suffice for an evening meal as it had so many times before…

The last two years have been challenging, to say the least. In such situations, the “must do” list sees a daily shuffling, and carry-overs stack upon carry-overs…big sigh…yes, that was a second big sigh you heard… It is little wonder that all three of my personas are 18th-century, homeless vagabonds.

On the positive side, the knee has gotten stronger with each outing, and I have spent an almost normal number of days searching for fresh venison. In looking back, I realize that this entire deer season has been devoted to fleshing out Mi-ki-naak. “Old Turkey Feathers” has not made it out once. For me, that is a huge surprise.

There is much more to do, and there always is for the traditional black powder hunter. A key element in the positive progression of any historical persona is the constant learning and evaluating process that accompanies attempting to re-live the past. This self-scrutiny is both a blessing and a curse, a source of great exhilaration and humbling frustration. As past posts have reflected, the development of the third persona, Mi-ki-naak, set in the fall of 1763 in the Lower Great Lakes region, has focused my thinking on the pluses and minuses of the other two characters from the mid-1790s.

As regular readers know, I try to establish a fall hunting camp for each of the characters. In 2016 and 2017 the emphasis was on Msko-waagosh, the Red Fox, and his domed wigwam. Over the years, the trading post hunter has occupied a number of camps, and a couple of those abodes still existed when Msko-waagosh began gallivanting around the North-Forty. Yes, the post hunter played second fiddle, but he at least had a fixed place in the wilderness. The untimely destruction of Msko-waagosh’s not-so-old canvas wigwam in the sequestered valley was a setback, magnified tenfold by the events of this summer.

Hope hides in the midst of calamity. With two returned captive personas, I did not want to create two domed wigwams. Not only is this confusing for the re-enactor, but it is also confusing for readers trying to figure out who is where and when. Again, out of confusion emerges historical clarity.

The People of the Three Fires: the Ojibwe, Odawa and Potawatomi used similar shelters in the 18th century peninsulas that became Michigan. John Tanner speaks of staying with different bands. In reflection of this intermingling, Msko-waagosh uses an Odawa-inspired shot pouch. The one made for Mi-ki-naak follows this same lineage.

The interpretation of primary historical documents varies, but there is solid evidence that these Native Peoples had two styles of wigwam, one domed and the other peaked. Eighteenth-century paintings and illustrations reflect both structure types. So why not engage in experimentation in the wilderness classroom with one shelter of each style? That solution seems simple enough.

The Development of a Housing Plan

By early August, I envisioned a lean-to station camp for the post hunter, a domed wigwam for Msko-waagosh and a peaked wigwam for Mi-ki-naak. With the inception of that plan, I knew I would be lucky to get one shelter completed, and I was right.

The post hunter still had the “duck camp,” and all that shelter needed was a new cedar-brush covering. Msko-waagosh’s wigwam was gone, but the camp area was still intact. A quick-up stick shelter would suffice there. (To add insult to injury, a buck has used the south leg of the fire pit tripod for his personal rubbing post.)  Mi-ki-naak had nothing.

Although kneeling was a still a problem, I began collecting cedar poles the third week in October. A week or so later, fourteen pealed poles leaned against a modest white oak on the Snapping Turtle’s new homestead, a gentle knoll that overlooked the Riviere aux Raisins’ bottomlands.

The winter fury hit that weekend. The unusual arctic cold and accompanying snow was described by many veteran hunters as poor for late-December, much less early deer season. Just making it out and back for a 1763-era simple pursuit was taxing and sometimes life-threatening; the discomfort made worse by Mi-ki-naak’s scanty wardrobe. Spending time on the peaked wigwam was not possible.

Then on that glorious December afternoon in 1763, Mi-ki-naak found time to begin his peaked wigwam. The sun was bright and warm, the air a balmy 38-degrees. The wind was calm. After a bit of trial and error learning the peaked wigwam’s frame took shape. The next phase would have to wait. Following in the moccasins steps of the hunter heroes before him, a compelling desire to chase white-tailed deer overtook the need for immediate housing. And like so many times before, an alter ego’s moccasins crept off into the bottomlands of the Riviere aux Raisins…

2 Responses to So Many Times Before…