A Joyous Chorus of Hound Music

Seven woodsmen trudged up the long grade. The blazed trail cut through a young, regenerated forest. At seventy paces, the tight-growing maples, beeches, cherries and oaks looked like an impenetrable gray palisade. Before the first pause, the ragged column strung out. In my usual manner, I guarded the back trail, and grew concerned as the space between us hindered a common defense.

The trace narrowed, then turned to the southwest. Snow clung to slender branches and fell at the slightest disturbance. A wool mitten, gripped about the Northwest gun’s breech, protected the firelock’s prime from the inevitable crystalline cascades. Up ahead, three young beagles crisscrossed between Andy Duffy and Rick Aube, the lead dog handlers. Bufford and Zack, the oldest hound, nosed the column’s right flank, weaving in and out of the saplings. 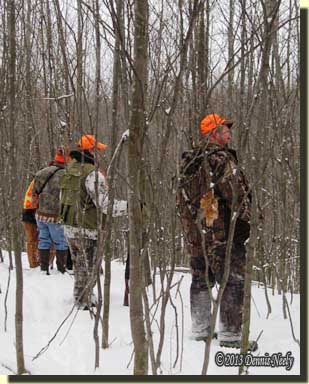 Deeper in the glade, days’ old snowshoe hare tracks crossed the trail; the beagles paid little attention as they looped to and fro. At the second pause, Aube stood with Bill Parker and Jacob VanHouten on a ridge crest and watched Nolan Beadle and Chris Case circle south in search of Buster and Bailey, a fine brother and sister pair of five-year-old beagles. A hound bayed to the west, then shut up. Spirits as quick as they soared; a rousing chase that was not to be.

The three woodsmen descended the hillside, striking off for a swamp Rick Aube knew about. “Andy’s headed that way with Bufford, Maggie and Zack,” he said.

The hill’s grade appeared too steep for smooth-soled buffalo-hide moccasins; I headed due south, following a gentler slope, then cut west and joined the other hunters at the swamp’s edge. VanHouten concurred with the wisdom of that decision.

As we wandered through the saplings, the hounds bellowed once or twice, but again, a chase never materialized. After conferring, the hunting party turned back. Just east of the swale hole, Parker, Aube and I paused; Duffy, Beadle and Case eased east; and VanHouten split the center.

Caught up in a wilderness moment, Parker and I commented on the magnificent beauty of this piece of ground. Rick Aube concurred while two beagles sniffed around us. As we continued our hushed conversation, a snowshoe hare bolted from under a deadfall, not fifteen paces distant. The hounds bellowed. My eyes lost the streaking hare in the white snow and close-growing saplings, only to glimpse it again thirty or so paces away. 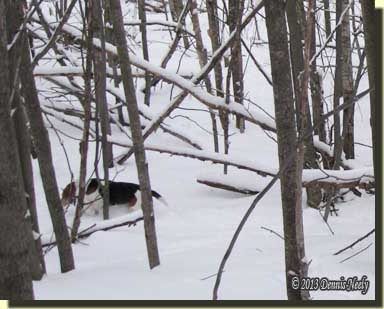 Well ahead of the hounds, the hare circled south, ran beside a large, fallen tree trunk, then ducked under a black shadowy space beneath the snow-covered hulk. The other three beagles joined the chase. A joyous chorus of hound music echoed in the glade as we watched the dogs sort out the trail on the far hillside.

Anticipating a future shot, I glanced down at the smoothbore’s lock with the intention of checking the prime. An upsetting clump of snow rested on the frizzen and against the Northwest gun’s browned barrel. I brushed it away in anger, not at the circumstance, but from frustration with myself. There was no knowing how long the treacherous glob perched; I could not remember covering the firelock since before we crossed back over the swale hole.

In disgust, I snapped the frizzen open, rolled the trade gun and spilled the precious gunpowder beside my right moccasin. I grabbed my shirttail and wiped away what little water I could see. As I picked the touch hole with a priming wire, the hounds sang their woodland aria. The disaster for the day, at least from my perspective, was yet to come.

On that pleasant Saturday in early February, I found it impossible to slip time’s shackles. In truth, I didn’t expect I would, but that did not deter me from experimenting in the wilderness classroom.

Each winter members of the Michigan Outdoor Writers Association attend a “winter rendezvous,” a weekend set aside for good fellowship, craft improvement and a heavy dose of the outdoor world. A long-standing tradition for the winter gathering is the annual “MOWA Rabbit Hunt.”

Earlier this month, Tami and I traveled to the Pere Marquette River Lodge, located south of Baldwin, Michigan, on M-37. The lodge served as the hub for the weekend. On Saturday, some MOWA members explored the area’s cross-country ski trails, others floated the Pere Marquette River, fished for pike through the ice or called coyotes in the nearby state forest. Andy Duffy, Jacob VanHouten, Bill Parker and I pestered snowshoe hares in the Pere Marquette State Forest in Osceola County.

Andy Duffy organized this year’s hunt, enlisting the help of Rick Aube, Nolan Beadle and Chris Case and their beagles: Bufford, Maggie, Buster, Bailey and Zack. At the end of the morning hunt, I felt it best to unload “Old Turkey Feathers,” so without thinking about the snow glob, I asked if anyone wanted to shoot a trade gun. Andy stepped up, shouldered the Northwest gun and cocked the hammer. The pan flashed, but the charge failed to ignite. 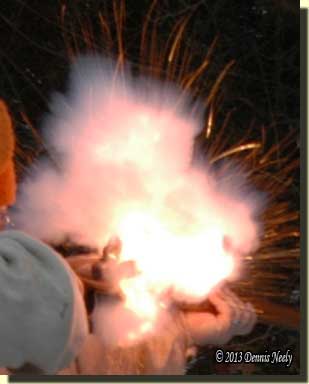 In hindsight, I should have stepped off to one side and discharged the load myself, then reloaded for others to try. Following that course, there is no question the trade gun would have fired every time. But I didn’t, and I feel the two flashes reinforced “the unreliability of flintlocks” myth among those watching, despite my explanation of the snow glob. Again, from hindsight, I fear this was a huge mistake.

Since last fall, one of the ongoing experiments in my wilderness laboratory has focused on keeping the priming powder dry during damp or wet hunting situations without the use of a cow’s knee. While researching a new persona, I started questioning my reliance on a greased leather lock cover, especially with regard to the Northwest gun in the late 18th-century lower Great Lakes region.

I have several references marked that refer to the use of a leather lock cover or a greased patch, but all of them involve a rifle, none with smoothbores. In discussing this with other traditional black powder hunters, I find that some feel a greasy rag or scrap of cloth was used, but no one has definitive documentation for this practice, either. Several of Cornelius Krieghoff’s mid-19th-century winter paintings depict something wrapped around the lock area of the arms carried by Native hunters and trappers. The time period and location are incorrect for this study, but nonetheless intriguing.

Throughout my journey back to yesteryear, I have always embraced failure as a positive—something akin to: “Now I know that won’t work.” Safety is always the first priority, and with that in mind, I always try to consider and anticipate the consequences of any given experiment before commencing. No matter how small or seemingly unimportant, each result is weighed and analyzed, compared to known documentation and considered in light of other results. Sometimes the results confirm the hypothesis, but most times they lead to more study.

When I glanced down and discovered the snow clump on the pan cover, I viewed the incident as failed diligence on my part and another stepping stone toward a period-correct solution. After all, I am used to taking such little failures in stride and assimilating them into a larger mosaic. And in the back of my mind, I knew there was a high probability the gun would not fire.

After much thought, the point that keeps recurring is that I need to do a better job of selecting the appropriate classroom setting for my experiments. For me, the opportunity to hunt with others, both modern and traditional folks, is so infrequent that I don’t, or didn’t, consider the ramifications of a failed experiment. That will change, and I hope my shortcomings might be a lesson to other traditional black powder hunters.