Mind if I Look?

“Do you mind if I take a look?” a traditional woodsman asked, lifting the leather strap of my shot pouch from “Old Turkey Feathers’” muzzle as it rested against a white oak tree. “I’d like to see what you carry.”

“Sure,” I replied, “but there are some extra patches and cards in there. I used that bag for a woodswalk a few weekends ago and I haven’t had a chance to clean it out,” I said.

“Mine’s a mess, too,” Fred said with a laugh as he lifted the buckskin bag’s flap and started examining each treasure as if it had just been unearthed from the sands at Fort Michilimackinac.  As Fred held the single wing-bone call in his fingers a funny look came across his face. “You aren’t going to write about this, are you? You won’t use my name?”

“Well, Fred, I can’t say that I won’t write about it sometime in the future.” And Fred, I guess I never answered your second question. 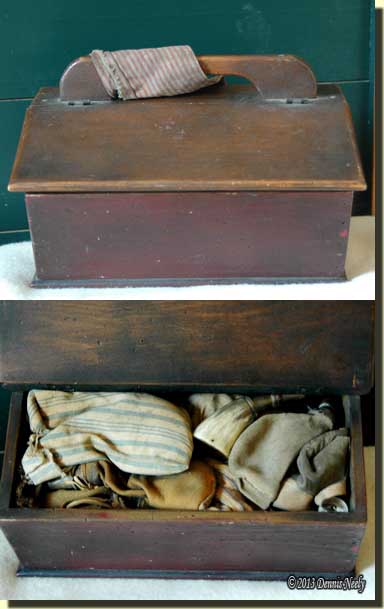 As I lifted the shooting box’s lid, I thought of Fred and broke out laughing. If he thought my shot pouch was a mess, he should’ve been standing next to me at that moment. The box was so full that the lid wouldn’t close tight, and it hadn’t for some time. To the unknowing eye, the hodge-podge of cloth sacks, leather bags, tarnished tins and other necessities would certainly seem unorganized and confusing, but I knew each artifact by sight and most by feel.

In my mind, at least, I separate traditional black powder hunting from competitive shooting. Thus, the shooting box is supposed to be dedicated to shooting and the shot pouch to hunting, but somehow that just doesn’t seem to work out. Because I prefer the primitive side of the black powder shooting sports, my shot pouch often becomes a liaison between the two endeavors, never giving true justice to either activity. I tried to rectify the situation by dedicating my old beaded voyageur shot bag to competition.  That worked for a shoot or two, then I left it home, grabbing the hunting pouch out of habit.

I had hoped to make it to the range the other day, but life got in the way. That’s happened a lot in the last few years, and I know I’m not alone in that respect. When the time just isn’t there, a few minutes devoted to traditional hunting or shooting is better than nothing at all. I was feeling pretty down so on a whim I grabbed the box and hefted it up on the bench. At the very least, I reasoned, I can get it cleaned out and ready to go.

I built the shooting box after my first trip to the National Muzzle Loading Rifle Association’s National Championship in September of 1985. I camped in the primitive area, and even though everyone shot from the pouch, they always returned to camp and refilled their shot bags from a shooting box. At Friendship, the boxes I saw varied from a simple plastic tackle box to an ornate, hand-dovetailed oak beauty. I mulled my choices on the long drive home.

Growing up, we had a tool box grandpa Neely had made. We kept it in the farm shop. That box had a wood handle, two sloping sides and was open for easy access. It always held plumbing tools and fittings, plus a lifetime of dust equally dispersed in the bottom. I modified his design a bit and added a hinged lid. Grandpa Neely’s toolbox was well-worn. The outside had been painted at one time and was nicked and stained from a multitude of mishaps—displaying a “fine patina” as the antique collectors say.

I stained the inside of my shooting box a light brown and painted the outside burgundy. Much to my oldest daughter’s chagrin, I beat the daylights out of it with two old muskrat traps, a small chain and a few drops on the scrap steel pile. After staining the entire box dark brown, I added twenty years of wear with a judicious scrubbing using coarse steel wool soaked in mineral spirits, then coated it with a hand-rubbed application of varnish.

From the beginning, the shooting box was devoted to the trade gun. I wanted its contents to look old and well-used, so I sewed a sack to hold the pillow-ticking cleaning patches, a buckskin bag for the .610 round balls and bought a shiny tin for shooting patches. When Roger Rickabaugh and Max Vickery introduced me to Shaw’s Quail Walk, I added cloth sacks for fiber wads, .125 cards and over-the-shot cards, a kidney-shaped shot bag made of leather with a hand-carved basswood spout, and a half-pint Mason jar for wad lube. Cleaning tools got their own bag, and when the wad sacks didn’t work out so good, I bought three additional tins to set on the loading bench to keep the wads separated.

I won a small brass powder flask, filled it with 4Fg priming and tossed it in the box. A few pairs of earplugs followed, a pair of reproduction scissors and one or two short starters made it, too, along with a spare knapping hammer and a hand forged screwdriver. Tooth picks to plug the touch hole are in the bottom right corner and in the back left I keep a bag of flints. When I started priming from my regular powder horn, I relegated the old priming horn to the box so I knew right where it was.

What’s in the Box?

The first step in cleaning the shooting box was to pull everything out of it, and as I did, I decided to include a listing of what it currently contains. I thought this might satisfy Fred’s curiosity. Did I mention that he was concerned I might use his name? 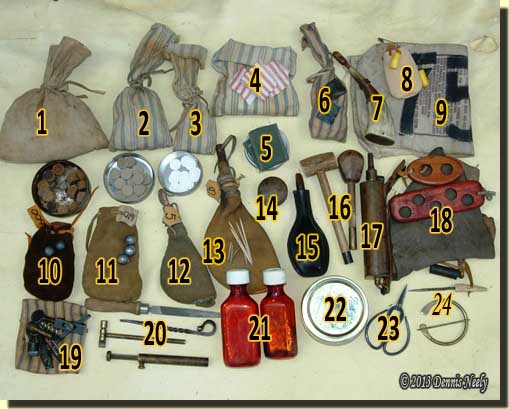 The mix of shooting necessities changes with experience, but that is the nature of the hobby. With the exception of the competitor’s number, bore solvent, oil and Mason jar, everything is close to period-correct and adds to the overall primitive impression of the box and its contents. I’ve tried period glassware, but the corks came out and I had a mess to clean up. But there is always room for improvement and a reason to go shopping.