A Rough and Tumble Woodsman

The ax bit hard. Red cedar chips scattered. Sweat spattered. The thud echoed. A quick upward jerk on the straight hickory handle dislodged the silver-edged blade. With a steady stroke, the single-bitted ax drew back, then for an instant, perched high above the woodman’s head, behind his right shoulder. In a blur, the axman’s hips and thighs uncoiled as the blade swung round and bit deeper into the notch. Red cedar chips scattered and the mighty thud echoed. 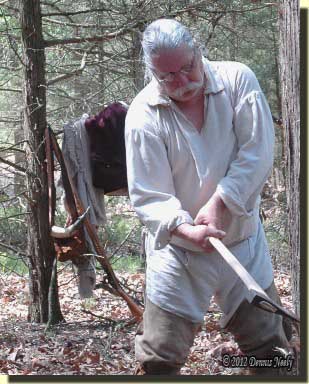 Again and again the ax arced on its relentless journey, glistening now and then as the keen edge passed from the shadows into the morning’s brilliant summer sun. Close at hand, the Northwest gun leaned against the nearest cedar tree; the shot pouch and powder horn hung by their leathern straps on a branch sliced short with a butcher knife. With one grab, the woodsman could retrieve all. The linen hunting shirt draped over a different branch, as did the burgundy, wool weskit. If not for the pesky deer flies, the sweat-soaked osnaburg trade shirt would be tossed aside, too.

With my heart pounding and rivers of salty perspiration burning my eyes, I let go of the ax, leaving it buried in the cedar tree. I stepped back and took a deep breath as I glanced about the forest. The pain of pushing too hard, of taking too many swings without resting, radiated up my arms, through my shoulders and griped the base of my back.

Cool water dribbled from the pewter flask, the one father gave me before I left for the backcountry, and eased my thirst. My eyes surveyed the trails to the east, then to the west. My breathing settled and my pulsing arteries tempered. Sandhill cranes chortled on the River Raisin, beyond the two tiny islands that hid in the bottomlands. A bright-colored wood duck circled once, then swooped up into a tall oak tree, not far away. I watched the fowl, and it watched me. I thought of John James Audubon, his gorgeous birds and his sometimes harrowing woodland adventures.

Some years ago, I happened to be sitting in a classroom with a number of nature writers. None of these individuals possessed the slightest desire to engage in hunting; a fair number detested the thought; and in a couple of cases, “anti-hunter” would be putting it mildly. By my estimation, most either belonged to the National Audubon Society or were strong supporters of that organization. Everyone in attendance knew I was a traditional black powder hunter.

In the midst of a discussion about Sandhill cranes, Audubon’s name came up, as it had a number of times before. But this time, one writer marveled at how wonderful Audubon’s memory was, and how observant he must have been to be able to paint his birds from life. Another chimed in, expressing similar wonderment.

In today’s world, an understandable disconnect exists between Audubon the ornithologist and painter, and Audubon the woodsman. Without getting into hunter/anti-hunter politics, I tried to let them down as gently as possible. One young lady gasped when she was told Audubon was an accomplished 18th- and 19th-century woodsman and hunter who worked primarily from “gathered specimens.” I stuck to the basics, but continued telling of his travels, how he carried a double-barreled, flintlock shotgun he called “Tear-Jacket” and toted around a 25-pound bag of lead shot, in addition to his other supplies. She left that day’s session clearly in denial.

Even as living historians and traditional hunters, we often fail to look to the writings of John James Audubon for inspiration and knowledge. After working on this year’s Fourth of July post, I thumbed through Delineations of American Scenery and Character. As so often happens, my mind skipped back to a prior woodland experience: the cedar cutting sojourn, the Sandhills on the Raisin and the drake wood duck.

One of my favorite essays in Delineations… is “The Prairie.” The story is filled with intrigue, danger and suspense—not a story a person might associate with the great ornithologist. But beyond the storyline are the intricate details that we, as living historians, so often read over.

“On my return from the Upper Mississippi, I found myself obliged to cross one of the wide Prairies…” (Audubon, 14)

“The weather was fine…My knapsack, my gun, and my dog, were all I had for baggage and company. But, although well moccasined, I moved slowly along, attracted by the brilliancy of the flowers… (Ibid)

“The track which I followed was only an old Indian trace, and as darkness overshadowed the prairie, I felt some desire to reach at least a copse, in which I might lie down to rest…the distant howling of wolves gave me some hope that I should soon arrive at the skirts of some woodland.

“I did so, and almost at the same instant a fire-light attracting my eye, I moved towards it, full of confidence that it proceeded from the camp of some wandering Indians. I was mistaken—I discovered by its glare that it was from the hearth of a small log cabin…” (Ibid)

As Audubon approached the cabin, he saw a “tall figure” who turned out to be a woman. He sought lodging for the night. He described her as speaking “gruff, and her attire negligently thrown about her.” He “took a wooden stool, and quietly seated myself by the fire.” (15)

Audubon tells of seeing a young Indian sitting with his head in his hands.

“A long bow rested against the log wall near him, while a quantity of arrows and two or three raccoon skins lay at his feet. He moved not…I addressed him in French, a language not unfrequently partially known to people in that neighborhood.” (Ibid)

The Indian looked up. His face was covered in blood and he pointed to one of his eyes. While shooting at a treed raccoon, the arrow split on the bowstring and sprung back, putting the young man’s right eye out. After looking further, Audubon noted that there was no bed in the cabin.

“…but many large untanned bear and buffalo hides lay piled in the corner. I drew a fine time-piece from my breast, and told the woman that it was late, and that I was fatigued. She had espyed my watch, the richness of which seemed to operate upon her feelings with electric quickness. She told me there was plenty of venison and jerked buffalo meat, and that on removing the ashes I should find a cake…I took off the gold chain that secured it from around my neck…” (Ibid)

Audubon ate venison and fed his dog the same. In due time, the Indian rose and paced back and forth. On one pass, the Indian pinched him hard.

“…His eye met mine; but his look was so forbidding, that it struck a chill into the more nervous part of my system. He again seated himself, drew his butcher-knife from its greasy scabbard, examined its edge…replaced it…taking his tomahawk from his back, filled the pipe of it with tobacco, and sent me expressive glances whenever our hostess chanced to have her back towards us.” (16)

“…I asked the woman for my watch, wound it up, and under pretence of wishing to see how the weather might probably on the morrow, took up my gun, and walked out of the cabin. I slipped a ball into each barrel, scraped the edges of my flints, renewed the primings, and returning to the hut, gave a favourable account of my observations. I took a few bearskins, made a pallet of them, and calling my faithful dog to my side, lay down, with my gun close to my body…” (Ibid)

In due time, Audubon heard voices. “I saw two athletic youths making their entrance, bearing a dead stag on a pole.” The two youths, who turned out to be the woman’s sons, started drinking whiskey and eating. Audubon and the Indian feigned sleep.

“Judge to my astonishment, reader, when I saw this incarnate fiend [the woman] take a large carving-knife, and go to the grindstone to whet its edge…Her task finished, she walked to her reeling sons, and said. ‘There, that’ll soon settle him! Boys, kill yon—–, and then for the watch.’

“I turned, cocked my gun-locks silently, touched my faithful companion, and lay ready to start up and shoot the first who might attempt my life. The moment was fast approaching, and that night might have been my last in this world, had not Providence made preparations for my rescue…The door was suddenly opened, and there entered two stout travelers, each with a long rifle on his shoulder…” (17)

Audubon got to his feet and greeted the travelers. He told them of the plot. Together they tied up the two sons and the mother. The next morning they marched the three, with their arms securely bound, off into the woods.

“…and having used them as Regulators were wont to use such delinquents, we set fire to the cabin, gave all the skins and implements to the young Indian warrior, and proceeded, well pleased, towards the settlements.

“During upwards of twenty-five years, when my wanderings extended to all parts of our country, this was the only time at which my life was in danger…I can only account for this occurrence by supposing that the inhabitants of the cabin were not Americans…” (18)

Although this passage is not dated, it appears to be from the middle of the first quarter of the 19th century—indeed, a completely different set of circumstances when compared to the last quarter of the 18th century. Yet, for the living historian and traditional black powder hunter, Audubon’s essay is filled with hidden treasures from “knapsack” to the Indian’s pipe tomahawk to the accepted rules of frontier hospitality.

And I never read this tale without thinking about the nature writing class, about my classmates’ insistence that Audubon would never harm one of his beloved birds and about the young lady who left that classroom in total denial that her hero was ever a rough and tumble woodsman who owned a double-barreled shotgun named “Tear-Jacket.”