“…I had but seven balls left, but as there was no trader near, I could not at present get any more. With those seven I killed twenty moose and elk…” (Tanner, 115) 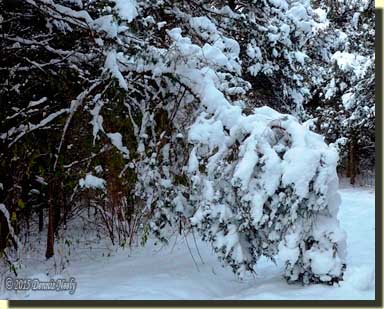 Wet snow lined even the dead cedar branches just above the ground. The tops of numerous young red cedar trees, the ones with full crowns and thin trunks, touched the storm’s white leavings. Not a single burgundy bough escaped the frosty deluge; all hung heavy, fighting back with all the strength they could muster. Off to the north, a loud snap told a different story, one of a wilderness struggle ended.

Buffalo-hide moccasins made nary a sound in the foot-deep snow. A blue-striped, four-point trade blanket sheltered the Northwest gun’s flint lock and protected the pan’s precious gunpowder. A corner of the folded wool blanket left a streak to the right of the footprints. At the crest of the hill, the woodsman’s course veered east.

Three evergreens down the slope, a broad cedar’s trunk bore tomahawk scars. Years before a few swift strikes trimmed a hole in the dead, lower branches and smoothed the trunk as a comfortable back rest. A moccasin pushed away the white carpet down to the cedar-needle duff.

About an hour after first light, gentle gusts began dislodging white clumps. Inner branches broke up the snow, showering sparkling ice crystals on the white trade blanket’s wrinkles and folds. Then, to the left, a patch of fur moved behind the dense covering that draped and weighed down the underbrush.

A brown eye appeared, an ear twitched and in a few moments, a foreleg flexed, but all vanished. The stubby shape of the deer’s snout and head, at least the parts that were visible now and again, were those of a first-year whitetail. “Not worthy of one of the death spheres.” The whispered words drifted west.

Twenty paces downhill, the summer foliage and resulting shade of three red oak trees held the autumn olive at bay, creating a modest opening that extended to the trail at the edge of the big swamp. The Northwest gun, protected by the trade blanket, remained at rest across blue-wool leggins as the doe stepped into that clearing. What appeared to be her sibling followed. Both stopped. The first licked her nose, then raised it to test the air. Although not showing signs of alarm, the two turned back.

The opening of Michigan’s firearms deer season marks a transition point for this traditional black powder hunter. With a wild turkey awaiting Thanksgiving dinner and a few squirrels in the freezer, the simple pursuit of white-tailed deer takes historical precedence.

The day before the opener is always a time of reflection and a prayer for blessings received. “Old Turkey Feathers’” bore gets a thorough washing; after scrubbing, the lock is oiled; and a sharp English flint, tightened with a firm hand, is a must. The shot pouch demands attention, too. Anxious fingers dig out the leather shot bag, half-filled with turkey shot, and set it aside. Then the ritual counting out of seven hand-cast round balls begins. 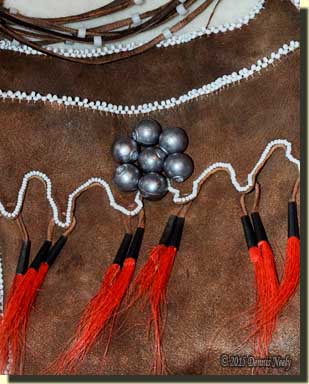 An outbreak of epizootic hemorrhagic disease (EHD) in the late summer of 2012 decimated our local deer herd. The effects proved to be far-reaching and have impacted my traditional hunts in ways never imagined. When the severity of the outbreak hit home, adjacent landowners agreed not to harvest does until the herd rebounds. Those two does were never in danger, merely a beautiful interlude in a snowy 18th-century Paradise.

My returned Native captive persona, Msko waagosh, the Red Fox, came to life during that fall deer season. Yes, he still hunted deer with the same burning passion as any normal deer season, even though unleashing the death sphere was out of the question.

The words of John Tanner, Jonathan Alder and James Smith, among other captives, became Msko waagosh’s guiding light, Tanner especially. The day before that ill-fated deer season began in 2012, the Red Fox counted out seven round balls—one for the bore and six for the pouch—in keeping with the restriction listed in Tanner’s narrative.

I do not see taking twenty deer with seven round balls as a possibility. The hunting load used in Old Turkey Feathers, coupled with my habit of selecting situations that present close-in shots usually results in the loss of the round ball. Over the years, I doubt if I have recover ten percent of the round balls from the deer I have killed. The ones I have are kept in a bag in the muzzleloading cabinet, at least that’s where I last remember seeing them, but that’s another story.

Counting out one’s death spheres sounds like a trivial point, but it is details like this, based on the words of a long-dead hunter hero, that assist in crossing time’s threshold, returning to a beloved bygone era and engaging in a living history scenario that is as authentic as possible.

A couple of mornings before, I sat on the west side of that same ridge. Light snow fell, the precursor of November’s first accumulation. Waterfowl hunters blasted away on the River Raisin, out beyond the bottoms and the sedge grass, near the lily-pad flats. Four shooters, hidden in an ugly blind that scars the river’s natural beauty, unloaded their guns, twelve shots in all.

“British!” I thought as I pulled the brass lead holder and a folded journal page from the split pouch that hung over my sash. The knife-sharpened lead scratched across the paper, recording the noteworthy event in 1790 terms.

A short while later a muzzle blast rang out from the river’s far side, partway up the wooded hill. A second, third and fourth moved south to north as a modern deer hunter gave immediate pursuit. “The battle is now a chase,” I scribbled.

Over the course of the next half hour, this impatient hunter fired eleven shots, from the sounds in all directions. I have no way of knowing if he secured his deer, I certainly hope so. This circumstance is all too common.

A few years ago a young man was sent my way for advice. He had killed a couple of deer, but both required a long chase. He emptied his pockets of shells, and for the second, had to borrow two slugs from his dad. I asked him to describe the facts surrounding the initial shots he’d taken. He went into detail for five deer, all beyond eighty yards.

After listening carefully, I recommended he go to the range for some practice. I told him to find out what the maximum distance was where he could place all of his shots in a six-inch circle. Next, I suggested he chamber one shell in his scoped slug gun and keep the rest in his pocket. And finally, I told him to pick a stand that offered shots within his range-determined maximum distance. A polite smile crossed his face, he offered a half-hearted “Thank you,” and walked away.

In following up with his father, I learned the shells for practicing at a range were “too expensive;” the one shell in the chamber suggestion “was stupid;” and the idea of sitting in a downed tree top in the woods instead of in the people box at the edge of the cornfield “was unrealistic.”

At about the seventh or eighth muzzle blast on the far side of the River Raisin, my thoughts drifted to that young man. I worried more about the deer that happened to cross his path than his hunting success.

“It is hard to keep one’s mind anchored in November of 1795,” I wrote, “with such a furious chase occurring so close…as for myself, I have but seven balls left…”

2 Responses to “…but seven balls left…”